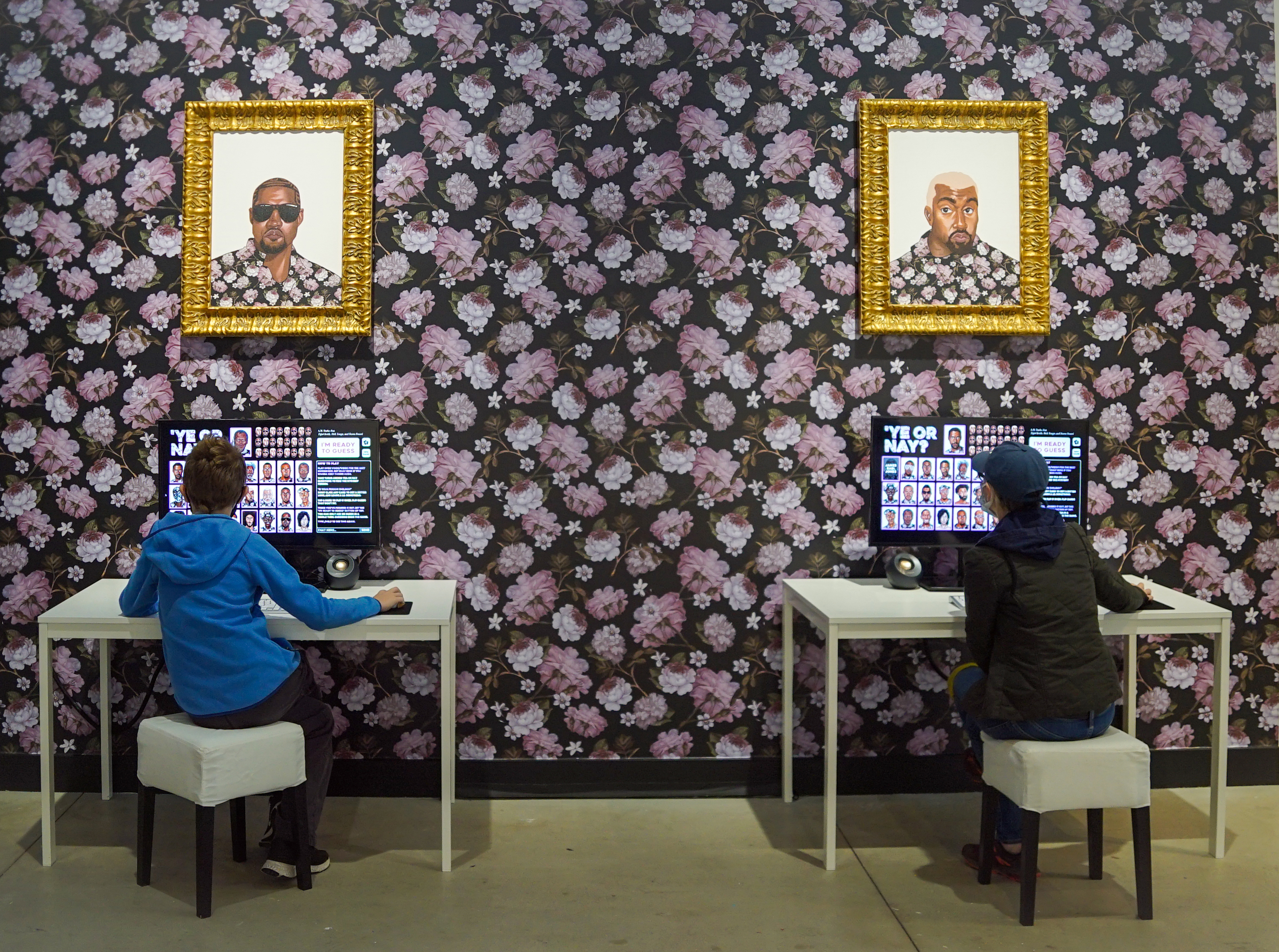 The exhibition “Difference Machines: Technology & Identity in Contemporary Art” is on view at Albright-Knox Northland in Buffalo, NY through January 16. Curated by art historian and curator Tina Rivers Ryan and artist Paul Vanouse, the exhibition brings together works by seventeen artists who explore themes of oppression, identity, and power in digital technology and culture. The exhibition includes software-based and internet art, animated videos, bioart experiments, online games, and 3-D printed sculptures from the 1990s to the present. Researcher and writer Charles Eppley recently interviewed Vanouse and Rivers-Ryan about the exhibition. The full transcript will be placed in the Albright-Knox archives, and an edited excerpt appears below.

Charles Eppley: “Difference Machines” draws its title from the Difference Engine, Charles Babbage’s early mechanical computer, while also referring to technology’s role in the construction of social difference, including gender, race, colonization, and personal identity. How do these themes relate throughout the exhibition, and what is the motivation for connecting historical computation technology to contemporary digital culture?

Paul Vanouse: To differentiate means to have the capacity to make sense of. Beginning in the Enlightenment, or post-Renaissance, differentiation was synonymous with knowledge: looking closer, subdividing, and categorizing as a way to understand. Epistemes of subdivision by people like Linnaeus and Descartes were a fetishization. In all its manifestations, the difference machine is not just about computation: it’s about the civilizing mission [of the Enlightenment] to sort what lies inside or outside.

Tina Rivers Ryan: The difference machine is a cultural apparatus about the production of knowledge. We’re arguably still living in that [Enlightenment] moment.

Difference machines also cultivate a historical amnesia: once you have the iPhone 13, you can’t remember the iPhone 2. Things are made to obsolesce so quickly. We felt it was important to emphasize that technologies have a history, because if they have a history, they can be changed. Technology can be intervened in, and different futures imagined. 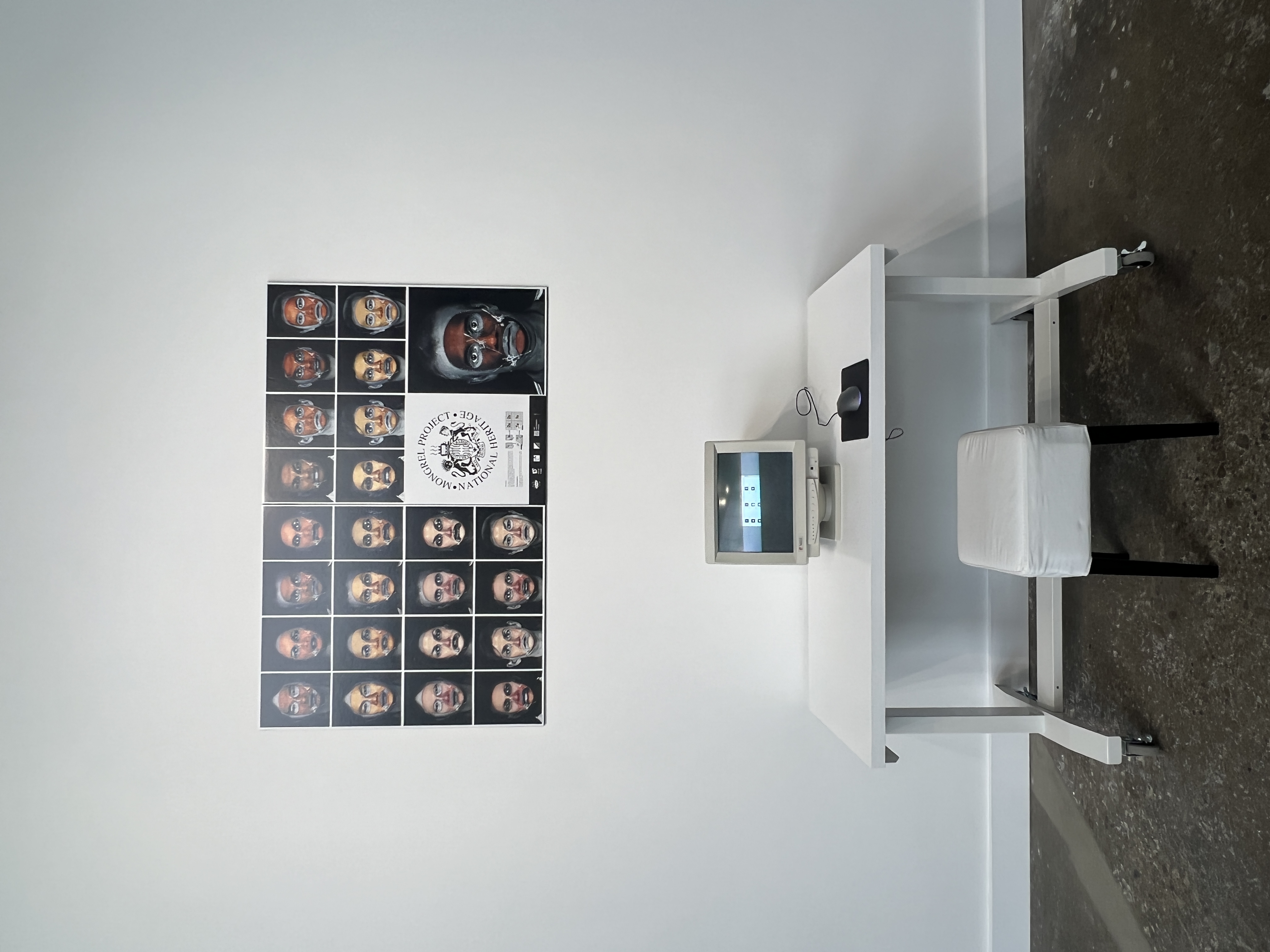 While they are often manifestations of the military–industrial complex, computers have also always been tied to a peacetime management of populations through census records and life insurance company tables, which categorize individuals in social aggregates. Computers, in a way, have always been about the construction of difference. The show presumes that difference is not something innate, but socially produced, and technology has always had a role in that process.

By invoking earlier moments in the history of computation, we’re trying to help people understand that the production of difference is intrinsic to computation. Where do we go from here?

CE: In the phrase “civilizing mission,” you’re referring to a European and Western idea of “civilization,” which has now developed into 21st-century global capitalism. Tina mentioned that we may still be living in that moment; Enlightenment ideas of civilization can be traced through postwar American technocratic capitalism, which coincided with cybernetics. In the US, cybernetics was elaborated by people like Norbert Wiener and Claude Shannon, you know, these core theorists of the 1940s and 1950s, who developed technologies and strategies of computation to assert centralized control over all kinds of dynamic systems—homeostatic systems, civilized systems, capitalist systems. Wiener was brought to India by the Indian Statistical Institute in the 1950s to “modernize” and “industrialize” the country amidst its postcolonial independence. For these people, computation and automation were means to attain a cybernetic society, right? What sort of societies did they create?

TRR: We tried to answer this question in our essay. Why must difference be produced? It’s because of colonization. As the colonial project expands, there is a need to manage the bureaucracy, but also the knowledge that is produced. For example, the first encyclopedias of the 17th century were related to the expansion of territory through knowledge and power. The concept of race was invented to justify chattel slavery.

PV: Along with the idea of race is the idea of subrace and the multiplication of difference. You get a whole range of relationships to the center, right? And with distance from the center comes degrees of difference increasingly regimented. Colonization does not produce a passive binary, but all kinds of subdivisions.

TRR: Keith Piper’s Surveillance: Tagging the Other (1992), the earliest work in the show, addresses contemporary surveillance technologies and the legacy of colonialism. We are not living in a “postcolonial” moment. The colonial project is ongoing and surveillance is directed and targeted at certain communities, identities, and bodies. It’s a colonialist way of understanding difference.

PV: I first saw Piper’s work in 1995 in Montreal. It just blew me away. This postcolonial conversation was just not applied in new media in a way that felt tangible. María Fernández pointed this out at the time. Keith Piper and Graham Harwood, who is a part of Mongrel, since the early 1990s got much deeper into class and race in the space of computation than other artists who revolved around a quintessential subject body, which is by default the white European male. 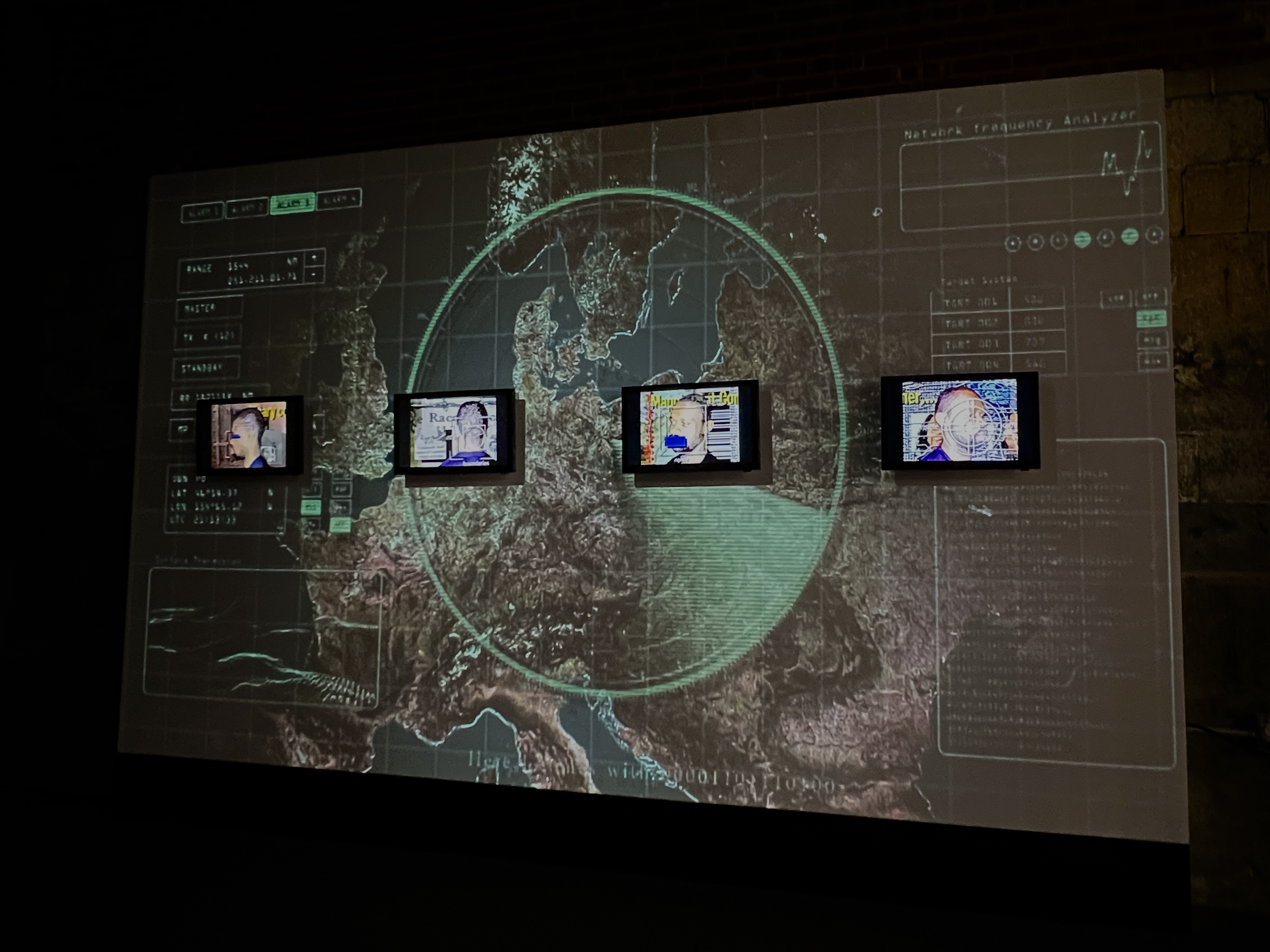 CE: To get back to this idea of subdivision, or infinite differentiation, you can have greater control over the granular parts. I’m thinking about how computer vision, machine learning, and audiovisual surveillance are recurring themes in this show. You can differentiate to such a degree that even though two things are similar to each other, they are separated in the system. So, that is a negative aspect of cybernetics, or of computation and the difference machine: it primarily is an issue of power and control. Who is free to make decisions in the system, especially about oneself as a differentiated subject? The works in this show, such as those by Piper, Mongrel, and A.M. Darke, bring this idea of difference-as-domination to the foreground. But other works pose the construction of difference as liberatory and empowering.

TRR: The reality is—as many artists said to us—that technology has a potential to be both liberatory and oppressive. The answer hinges on the politics of visibility. Who gets to choose to be visible or invisible? For some artists, the liberatory potential is found in demanding to be visible, taking up space, and being recognized. For others, the power lies in refusing to be legible or recognizable. The work of Zach Blas, for example, can be read as a very practical and strategic way to resist being detected by systems, like using masks to avoid facial recognition technology. But more profoundly, it is actually about refusing the reduction of difference to an act of naming that codifies identity as something stable instead of dynamic, and something named only to be controlled. Likewise, Sean Fader uses photography and Google Earth databases to memorialize victims of LGBTQ+ hate crimes. But he is cognizant of the fact that being visible was what made these people get killed. The more I spend time with these works, the less I see it as a flat binary. There are many emotional tones in the exhibition: joyful, mournful, angry, satirical, neurotic, etc. All of them show that visibility is a double-edged sword. 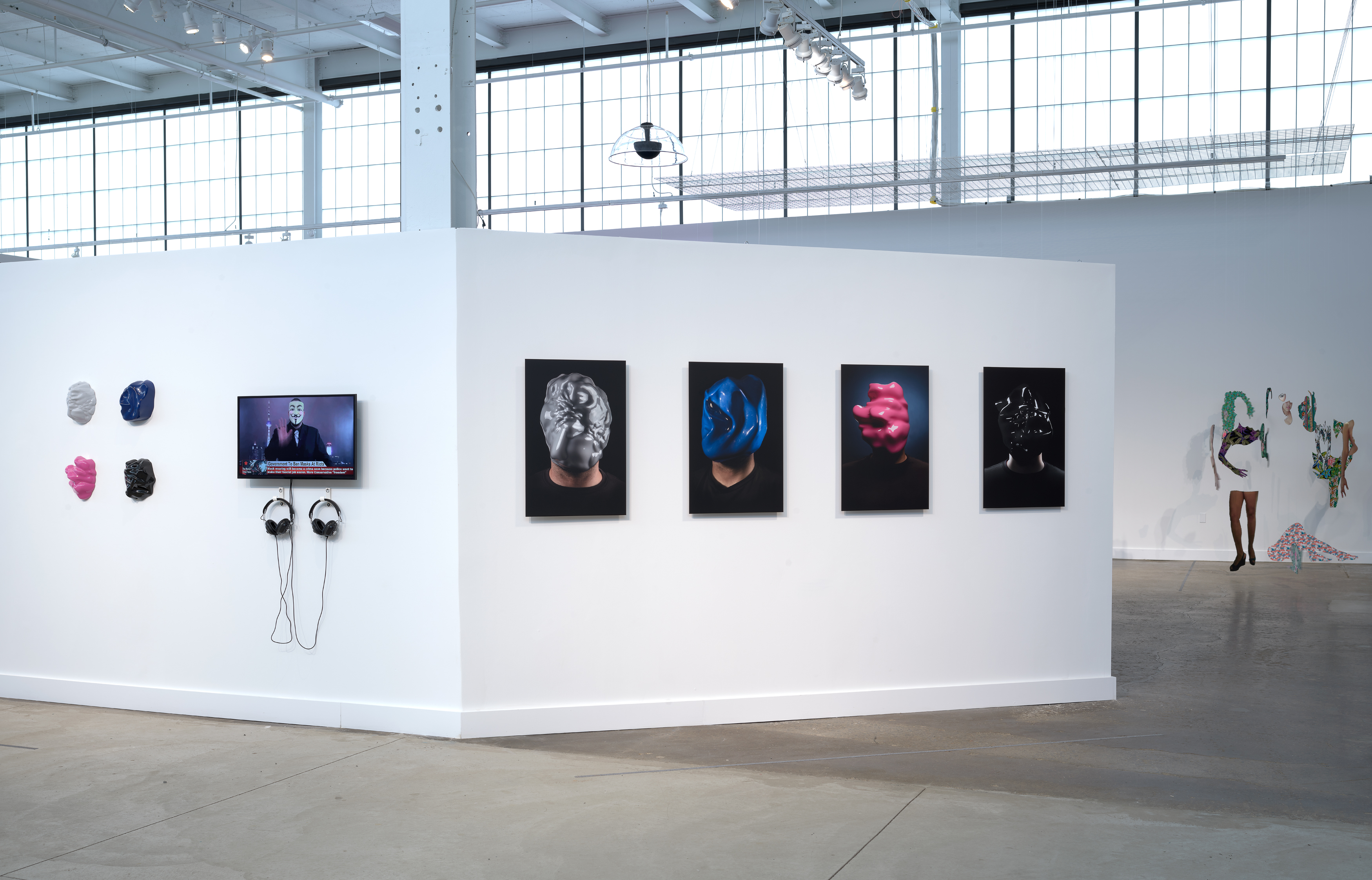 PV: The show ends with the work of Skawennati, who is unapologetically pro-visibility in the tradition of Afrofuturism, which asks of science fiction: Why are we not represented? She powerfully inserts, using Second Life as an animation platform, stories that state clearly: “Yes. Native Americans will be here in the future. Here are our myths seeping into this kind of technological infrastructure.” I find it proactive and optimistic. Saya Woolfalk’s work also offers that view.

TRR: Skawennati refers to herself as optimistic. The way we imagine the internet has always been problematic—as she has pointed out, early thinking about cyberspace as a kind of “uncharted territory” echoed the language of colonization and played down the fact that networks are inherently the product of specific cultural systems. But she remains optimistic, despite the history of the internet, including the recent rise of disinformation campaigns. That work is sophisticated because it questions how the identity of Indigenous people, and especially their subjugation, is tied to how their relationship to technology has been understood [under settler colonialism]. Part of that project says: “Well, you know, Indigenous futurism imagines not only a future where Indigenous people exist, but also a future that recognizes Indigenous technologies.” 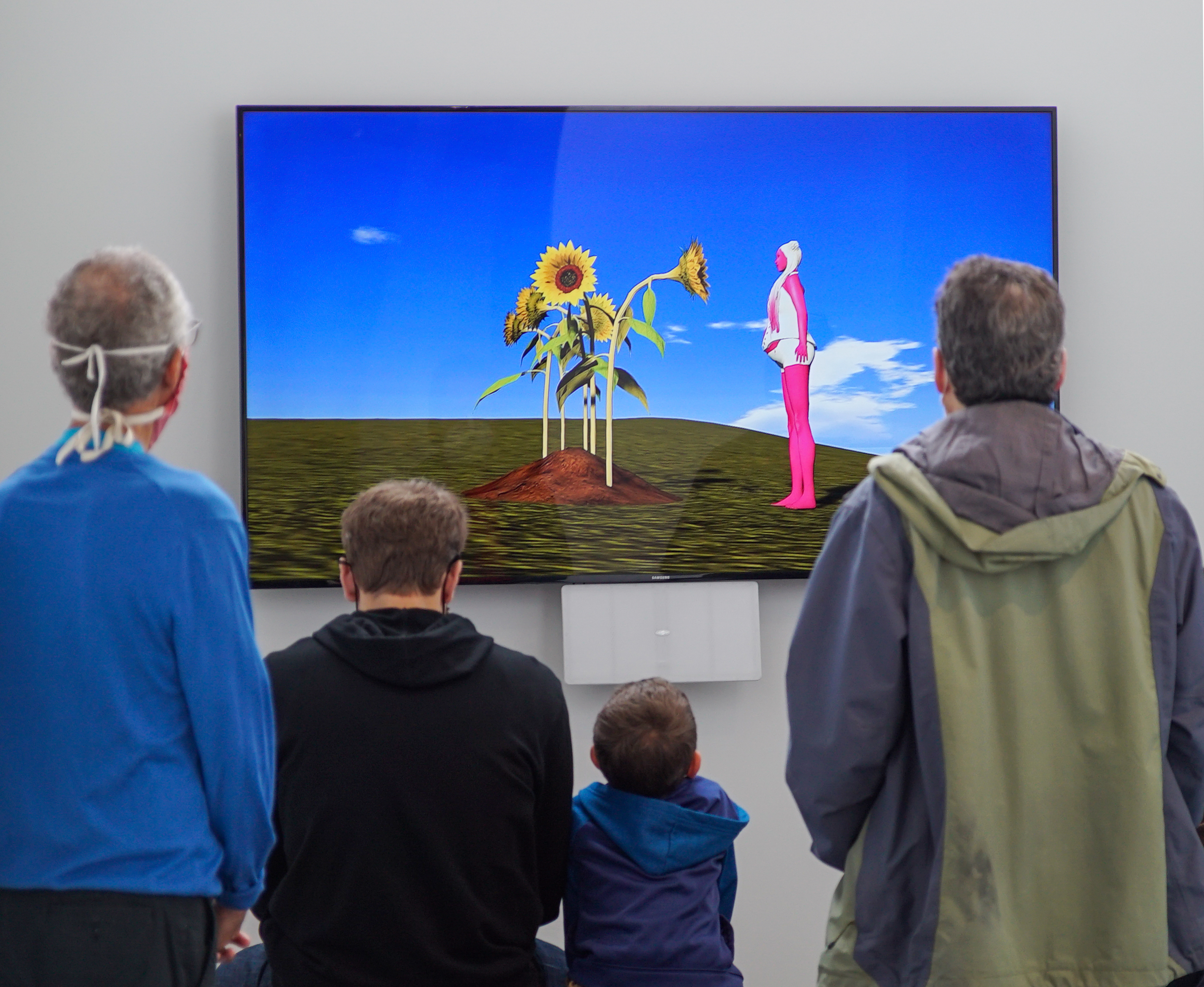 CE: In traditional algorithmic art and early digital art, the set of instructions would be inscribed into a fixed object or image. Today's algorithmic art is often more performative. I’m interested in thinking about the algorithm as an interface [that exposes a particular] technological form and, you know, also the man behind the curtain: the sociocultural conditions that relate to or depend on algorithms.

TRR: Digital technologies are actually technologies of extreme individuation, rather than aggregation in some ways. A.M. Darke’s artwork is about how individuation doesn’t happen in a neutral context. Your experience of that game, whether you’re white or Black, is very different. Seeing it as a white person, it puts you in the position of mediating identity through language that is essentially not part of the culture in which I grew up (e.g., thinking about vocabulary for describing hairstyles). It makes one cognizant of the fact that the act of naming is not part of an objective system of knowledge. Naming is culturally contingent, and people can relate to the act of naming in different ways through levels of privilege, power, and access.

CE: Technologies of power are leveraged against marginalized communities broadly in our society, and surveillance is increasingly algorithmic. Cameras are not only digitized, but connected to networks that produce and analyze data simultaneously. It’s a cybernetic nightmare. Do artists offer something unique, separate from developers and policy-makers, about the social impact of algorithms?

PV: In Lozano-Hemmer’s piece, you have a surveillance system constantly looking at the audience. When you look at it, you are also being looked at. It’s a circularity of visual pleasure and capture. You begin with this, only to look at the faces of disappeared students in Mexico, and realize that, on the one hand, digital surveillance always implies a massive dataset, but on the other this one is conspicuously small. It’s a dataset composed just of these disappeared students. They have never been found, and never really been looked for very much. Surveillance platforms protect some people’s interests, but never people like those shown. There’s a real sadness and irony of failure to that piece, because it represents digital surveillance misapplied, and never working for what we would like it to. It’s very humbling and haunting.

TRR: The show could be understood as an attempt to explore Safiya Umoja Noble’s Algorithms of Oppression as an exhibition. What if we presented a bunch of artworks that explore that thesis, and emphasize that artists have been having this conversation for 30 years? Amongst a certain community of scholars, artists, and cultural theorists that is manifestly true. However, in culture at large, math is broadly understood as objective. There is utility in using art to reflect upon or contribute to a larger conversation around the fact that these programs are only as good as the information that they are trained on. We need to think more carefully as a society about how code is written and how datasets are built. They touch every aspect of our lives and are incredibly problematic.

“Difference Machines: Technology and Identity in Contemporary Art” is on view at Albright-Knox Northland in Buffalo, NY through January 16, 2022.